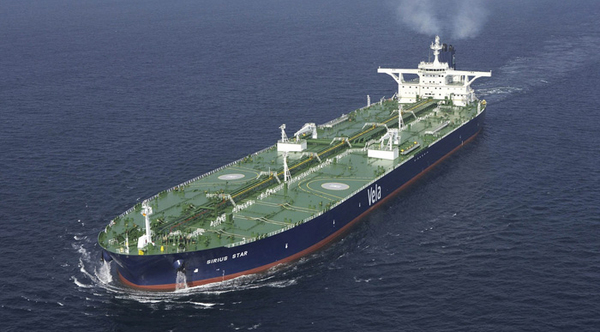 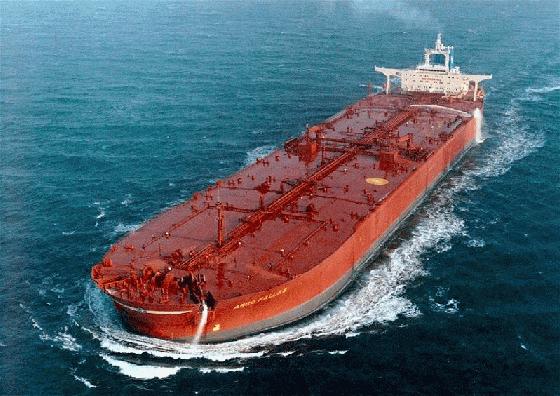 NAIROBI, Kenya (CNN) -- The crew of a supertanker are reported safe after pirates hijacked the vessel laden with oil and holed up in lawless Somalia.

Two more ships were attacked Tuesday off the East African coast and a third was seized Saturday but only reported Tuesday, according to a monitoring agency.

The spate of hijackings underscores a dramatic increase in piracy that has alarmed national governments and shipping companies around the world.

"This is completely unprecedented," said Michael Howlett, assistant director of the International Maritime Bureau in London, which tracks pirate attacks. "We've never seen a situation like this."

The three hijackings reported Tuesday bring to 95 the number of incidents involving pirates and commercial vessels off the East African coast this year -- up from 31 incidents in 2007 and 10 in 2006, Howlett said.

The Sirius Star supertanker attacked Saturday weighs more than 300,000 metric tons and the ship's operator says it is fully loaded with oil. Industry sources say that could mean as much as 2 million barrels.

Its 25-man crew -- including British, Croatian, Polish, Filipino and Saudi nationals -- are reported to be safe, according to Dubai-based Vela International Marine.

"Our first and foremost priority is ensuring the safety of the crew," said Vela President Salah Kaaki. "We are in communication with their families and are working toward their safe and speedy return."

The Saudi-owned vessel is the largest ship seized to date in the escalating regional piracy crisis.

It was captured more than 450 nautical miles southeast of Mombasa, Kenya.

The U.S. Navy said the tanker was now anchored off Haradhere, a village reported to be a base for pirate gangs, 300 kilometers (180 miles) north of Mogadishu. 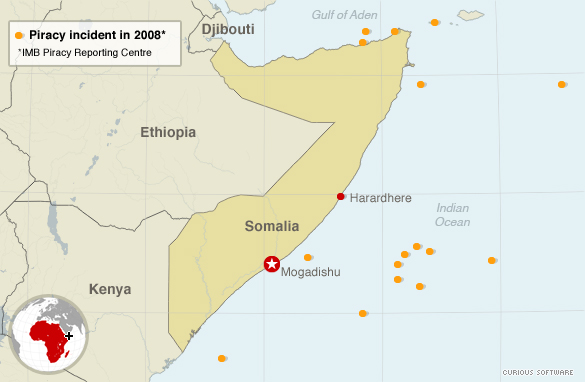 "I think it will only reinforce the resolve of the countries of the Red Sea and internationally to fight piracy," he said on a trip to Athens, Greece. "Piracy is against everybody. Like terrorism, it is a disease that has to be eradicated."

On Tuesday morning, pirates hijacked a Thai fishing vessel and a Chinese cargo ship carrying wheat in the waters off the Horn of Africa.

A third ship -- a Chinese fishing vessel -- was hijacked Saturday, but word did not reach authorities until Tuesday, Howlett said.

The hijacked ships include the MV Faina, a Ukrainian vessel loaded with weapons and tanks that was seized on September 25 along with its 20 crew.

"One ship gets released and another ship is hijacked the next day," Howlett said.

The burgeoning piracy crisis has flourished in Somalia where almost two decades without a central government has left a country wracked by conflict, chaos and poverty.

It is not known if Vela is in talks to pay a ransom to the hijackers of the Sirius Star, although money has been paid by other companies to pirates in the past.

Hussein added that international navies operating off the coasts of Africa and the Arabian peninsula need to use force against the pirates who have been hijacking vessels.

The U.S. Navy's Fifth Fleet said it was not expecting to send ships to intercept the Sirius Star. NATO also said it would not divert any of three ships currently in the Gulf of Aden, The Associated Press reported.

A multinational naval force including vessels from the U.S., the UK and Russia has been patrolling the Indian Ocean waters seas near the Gulf of Aden, which connects the Red Sea and the Arabian Sea, following a sharp increase in pirate attacks in the region.

But pirate attacks are spreading farther north to the Gulf of Aden and farther south off the Kenyan coast, said Noel Choong, who heads the International Maritime Bureau's Piracy Reporting Center.

"The risks are low and the returns are extremely high for these pirates," Choong told CNN.

Around 20,000 oil tankers, freighters and merchant vessels pass along the crucial shipping route each year.
advertisement

A Norwegian shipping firm has ordered its vessels to avoid the waters off the Horn of Africa and criticized governments for failing to curb the wave of piracy.

The decision by the maritime company Odfjell SE means its 90-plus ships will take the additional time and expense to sail around the southern tip of Africa instead of going through the Suez Canal.