SEOUL – A South Korean tabletop exercise on emergency responses to a fictional mysterious outbreak led directly to tools the country deployed less than a month later to manage the arrival and spread of the coronavirus, one of the experts involved said

According to an undisclosed government document, on Dec. 17 two dozen leading South Korean infectious diseases specialists tackled a worrying scenario: a South Korean family contracts pneumonia after a trip to China, where cases of an unidentified disease had arisen.

The hypothetical disease quickly spreads among the colleagues of the family members and medical workers who treated them. In response, the team of experts at the Korea Centers for Disease Control and Prevention (KCDC) developed an algorithm to find the pathogen and its origin, as well as testing techniques.

Those measures were mobilized in real life when a first suspected coronavirus patient appeared in South Korea on Jan. 20, the document said.

"Looking back over the past 20 years, humans were most tormented by either influenza or coronaviruses, and we're relatively doing well on influenza but had been worried about the possibility of the outbreak of a novel coronavirus," said Lee Sang-won, one of the KCDC experts who led the drill.

A documentary showing a Chinese virologist catching wild bats in mountains have fuelled a conspiracy theory, which suggests that the novel coronavirus may have originated in Wuhan's disease control authority.

The seven-minute film features the centre's researcher Tian Junhua, who has visited dozens of caves in Hubei province to capture the flying mammal.

It has sparked a fresh round of speculation over the origin of the coronavirus, with some people again suggesting that pandemic could be a man-made crisis.
Other rumours have blamed the global outbreak on the Wuhan Institute of Virology or the US troops. A number of versions allege that it could be a bio-weapon engineered either by China or the United States.

Experts have dismissed such hypotheses, calling them 'not credible' and accusing them of 'creating anxiety'.

One US-based medical professor told MailOnline that the fact Chinese, as well as American, researchers have isolated similar viruses is 'a far cry from making and releasing' the novel coronavirus.

The exact source of the new coronavirus, known as SARS-CoV-2, remains unknown.
... 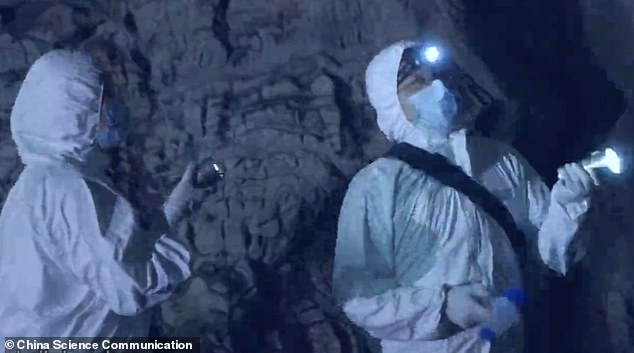 The documentary in question, titled 'Youth in the Wild: Invisible Defender', is part of a series, which introduces the work of young Chinese scientists.

It was produced by China Science Communication, a website run by the China Association for Science and Technology. The episode was released in December, a few weeks before the outbreak emerged in Wuhan.

It follows the life of Mr Tian who spends days on end roaming wet and dark caverns to capture bats for his research work.

The 40-year-old father-of-two is the Associate Chief Technician of the Department of Disinfection and Pest Control of the Wuhan Municipal Center for Disease Control and Prevention (CDC).

He said in the film: 'I work in the field of virus sample collection and classification and I am a defender of an invisible defence line.'

The video depicts how Mr Tian and his colleague explored one cave and captured the nocturnal animals there while donning full-body protective suits.

He added: 'Among all known creatures, bats carry various viruses. [One] can find most viruses responsible for human diseases in them.'

He confessed that he often felt scared during such expeditions, which could stretch on for days.

He explained: 'I can feel the fear: the fear of infections and the fear of getting lost. Because of the fear, I take every step extremely cautiously.

'The more scared I feel, the more care I take in executing every detail.

'Because the process of you finding the viruses is also when you can be exposed to them the easiest.'

The researcher has visited dozens of undeveloped caves in Hubei and studied more than 300 virus vectors in the past 10 years or so, according to the film.

He concluded: 'I do hope these virus samples will only be preserved for scientific research and will never be used in real life.'

Mr Tian's confession has led some observers to consider him as a key figure closely associated with the origin of the coronavirus.

One article from The Washington Times claimed that the film showed Mr Tian and his co-workers 'engaged in casual handling of bats containing deadly viruses'.

The US-based website cited a report by Wuhan Evening News in 2017, which described how Mr Tian had come into contact with bat urine once after forgetting to wear a protective suit.

It connected the event with SARS-CoV-2 as it wrote: 'To avoid contracting a disease, he self-quarantined for 14 days - the same recommended period for people exposed to the new COVID-19 strain.'

COVID-19 is the name of the disease caused by the novel coronavirus.

In the original Chinese report, which was also published by China's state news agency Xinhua, the incident was used to demonstrate the risks of Mr Tian's job.

It said that Mr Tian would not be able to find medicine had he been infected on the line of duty.

One anonymous US politician expressed his concerns about Mr Tian's role to The Washington Times.

The unnamed State Department official said: 'He lives and works at Wuhan's CDC, a few hundred yards away from the Huanan wet market.

'He is among the small team in Wuhan that has contributed to China's obsession in recent years with virus hunting and research.'

It is widely believed that the coronavirus pandemic first emerged in the Huanan Seafood Wholesale Market.

The once-popular marketplace is situated about 700 metres (765 yards) from Wuhan's CDC. It was shut in January in the wake of the epidemic.

The latest argument about the origin of the coronavirus comes after another conspiracy theory proposed the Wuhan Institute of Virology as its birthplace.

The lab opened in November, 2018, and is classified as P4, the highest level in bio-safety. Part of its research focuses on different strains of coronavirus, according to previous reports.

One expert has firmly rejected such allegations.

'Bat coronaviruses resembling SARS and the new SARS-CoV-2 have been isolated by many groups of legitimate scientists, including the Wuhan lab and plenty of US investigators. This is a far cry from making and releasing the new virus,' Dr Gerald Keusch, a Boston-based professor told MailOnline.

Dr Keusch, Professor of Medicine and International Health at Boston University's Schools of Medicine and Public Health, stressed that no release of viruses from a high-level lab, such as the one in Wuhan, 'has ever happened'.

He defended his peers in the Chinese city as he said: 'The Wuhan lab is designed to the highest standards with redundant safety systems and the highest level of training.

'Many of its research faculty trained at a similar laboratory in Galveston, Texas. So we know the Wuhan team is as qualified as the Texas group…

'This means the assertion of a leak, rather than being highly likely, instead is highly unlikely.'

Chinese authorities have repeatedly denied the allegation that the virus could have come from the Wuhan lab.

Shi Zhengli, Director of the Wuhan Institute of Virology, said in February: 'The 2019 novel coronavirus is nature's punishment for humans' uncivilised life habits. I, Shi Zhengli, use my life to guarantee, [the virus] has no relation with the lab.'

Ms Shi urged the Chinese authorities to launch an official investigation into the matter.