(CNN) -- As horrified travelers watched, a Greyhound Canada bus passenger repeatedly stabbed and then decapitated the young man sitting beside him, who was sleeping with his head leaning against the window, a witness said Thursday.
Police officers and cars surround the bus near Portage la Prairie, Manitoba, on Wednesday night. 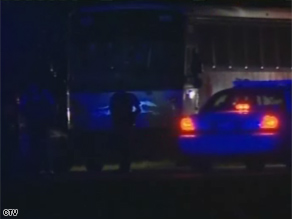 "There was a blood-curdling scream. I was just reading my book, and all of a sudden I heard it," said Garnet Caton, who was sitting in front of the two men.

"It was like something between a dog howling and a baby crying, I guess you could say. I don't think it will leave me for a while."

Caton said he shouted at the other passengers, many of whom also were sleeping, to leave. Video Watch Caton describe what he saw »

"Everybody got off the bus. Me and a trucker that stopped and the Greyhound driver ran up to the door to maybe see if the guy was still alive or we could help or something like that," Caton told CNN.

"And when we all got up, we saw that the guy was cutting off the guy's head. ... When he saw us, he came back to the front of the bus, told the driver to shut the door. He pressed the button and the door shut, but it didn't shut in time, and the guy was able to get his knife out and take a swipe at us," Caton said.

The incident happened late Wednesday west of Portage la Prairie, Manitoba, but a standoff between the attacker and police lasted into early Thursday.

The bus was traveling along the Trans-Canada Highway from Edmonton, Alberta, to Winnipeg, Manitoba, and was about 45 minutes from its destination when the attack occurred, said Greyhound spokeswoman Abby Wambaugh in Dallas, Texas.

Witnesses told Canadian TV that the attacker was wielding a butcher-type knife. They said the trucker who stopped provided wrenches and crowbars to several of the men, who were able to keep the suspect on the bus until police came. After the standoff, police took the man into custody.

Wambaugh declined to comment further, except to "confirm that there was an incident on one of our buses."

"I don't want to compromise the investigation," she told CNN.

The incident occurred on the first of two Greyhound Canada buses that were traveling together, she said. The bus was carrying 37 passengers. As many passengers as possible among those not directly involved in the incident were transferred to the second bus, she said.
advertisement

Others were taken to a hotel in Brandon, where they were met by Greyhound managers and police, Wambaugh said.

Once they are released, Greyhound will take them by bus to Winnipeg, and "we will do whatever is required to help them -- and that includes counseling," she added. 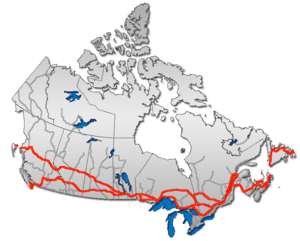 CNN kirjoitti:The bus was traveling along the Trans-Canada Highway from Edmonton, Alberta, to Winnipeg, Manitoba...

Helvettiin!
WARNING: THIS MEMBER CONTAINS NATIONALISM
If Multi-culturalism is the answer, It must have been one hell of a stupid question
http://patriootti.com/