Children were allegedly being trained for terror in New Mexico.

Three suspects tied to a New Mexico compound where alleged Muslim extremists reportedly trained children to be school shooters were released from custody on Wednesday, hours after a judge dismissed all of the charges against them, Fox News confirmed.

Child abuse charges against them were dropped because prosecutors missed the 10-day limit for an evidentiary hearing to establish probable cause.

During a separate hearing Wednesday, Judge Jeff McElroy dismissed the same charges against fellow defendants, Siraj Ibn Wahhaj and Jany Leveille. However, charges leveled against them on Friday, in connection to the death of a missing 3-year-old boy, remained.
Remains located at 'extremist Muslim' compound positively identified as the missing 3-year-old son of one of the suspects; Alicia Acuna reports on if additional charges are coming.

The five suspects were arrested by authorities after an Aug. 3 raid following a monthslong search investigating the disappearance of Abdul-ghani Wahhaj, a 3-year-boy with severe medical issues who went missing from Georgia in December. The occupants of the compound were "most likely heavily armed and considered extremist of the Muslim belief," an official said at the time.

Taos County Sheriff's deputies discovered 11 children at the compound, who were taken into the custody of state child-welfare workers. On Aug. 6, a child’s remains were found on the property.

Siraj Ibn Wahhaj was allegedly training children to commit school shootings, according to prosecutors, who later alleged that the juveniles were taught how to use firearms, as well as tactical techniques, in order to kill teachers, law enforcement and other institutions they found corrupt.

Health officials confirmed earlier this month that the discovered remains were positively identified as the 3-year-old's.

Chavez said Wednesday that it was a very difficult decision to drop the charges but the rule left him with no option. Prosecutors could still seek charges for the three by asking a grand jury to indict them but offered no immediate indication on how they would proceed. 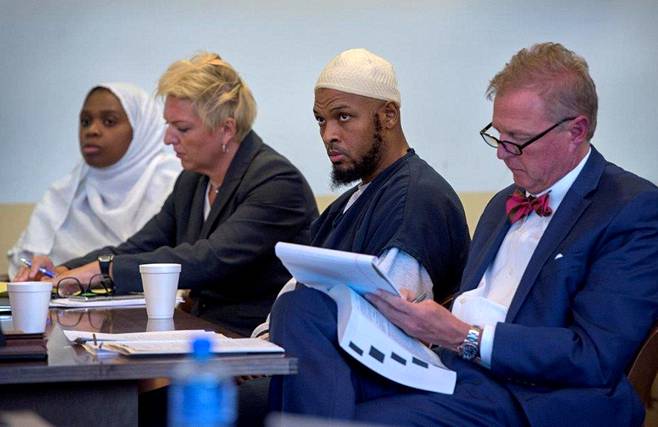 Authorities allege the Amalia, N.M., compound the adults had been living at until their arrest in August served as a terrorist training camp.

Jany Leveille, 36; Siraj Ibn Wahhaj, 40; Hujrah Wahhaj, 38; Subhanah Wahhaj, 36; and Lucas Morton, 41; were taken into custody last year after they were found living with 11 children at the compound that was in squalid conditions and had no water or power.

Ibn Wahhaj’s 3-year-old son was also found dead on the property. The members of the group are accused of kidnapping the child, who had severe health problems and later died.

The five were originally charged with weapons offenses.

Assistant Attorney General John Demers said those attacks were being planned against federal law enforcement officers and members of the military.

The indictment alleges the defendants gathers weapons and other supplies at the New Mexico compound, where a firing range was also built to train for a potential attack.