The alleged mastermind behind the execution-style killing of a father of three on NSW's south coast Hans faced court charged with murder.

The 42-year-old has been charged with the 2013 murder of Johnny Salafia.

Mr Salafia, 38, had put his two young daughters to bed and was answering the doorbell of his Kings Point home when he was shot in the head and chest.

The matter has been adjourned to Nowra Local Court on January 16, 2018. 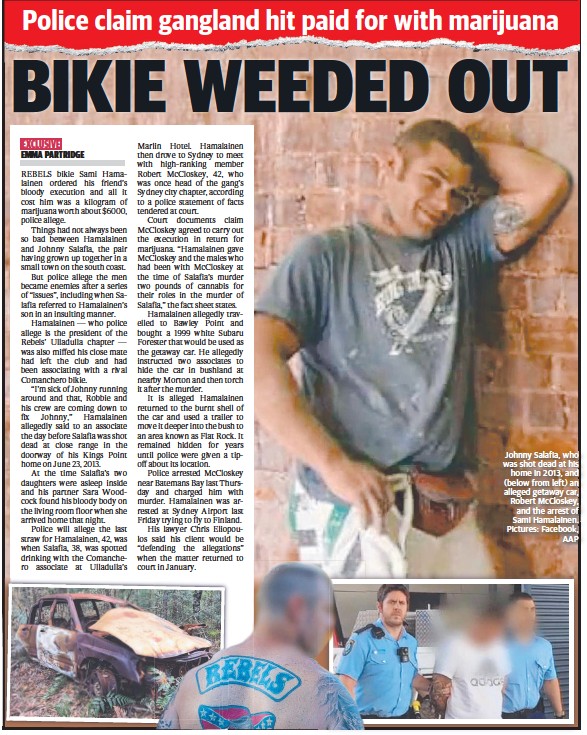 SAMI Hamalainen and Johnny Salafia were once the best of friends, the two bikies having spent their younger years growing up around the NSW South Coast town of Ulladulla.

But by 2013 their relationship had disintegrated.

Hamalainen had worn his Rebels outlaw motorcycle gang affiliation with pride while Mr Salafia drifted away from the club, a move that allegedly annoyed Hamalainen, who’s been charged with his friend’s murder.

Detectives believe the final insult for Hamalainen was when Mr Salafia — a father-of-three — was spotted drinking with a member of the rival Commanchero outlaw motorcycle gang at Ulladulla’s Marlin Hotel.

Within months Mr Salafia was dead. The 38-year-old was shot in the head and chest in June 2013 at the front door of his Kings Point home while his family slept inside.

A four-year investigation led to the arrest of Hamalainen, 42, at Sydney International Airport last week.

Second man arrested in connection to murder of Johnny Salafia
He had booked a Friday morning flight to Singapore just hours after a fellow Rebels bikie, Robert McCloskey, 42, was arrested in Batemans Bay and charged over Mr Salafia’s murder.

Police will allege in court Hamalainen organised Mr Salafia’s murder while Mr McCloskey, a plumber by trade with a Rebels flag tattooed across his back, carried it out.

At the centre of the case is the alleged fall out between the two mates.

McCloskey, the alleged triggerman, also grew up in the Ulladulla area but had been spending a lot of time in Sydney prior to Mr Salafia’s death and meeting with Hamalainen who, police allege, was travelling between the south coast and Sydney to organise the shooting.

Hamalainen was an influential member of the Rebels’ tiny Ulladulla chapter, which had fewer than three or four members at one time.

Mr Salafia was also a member of the club but only briefly.

On the night of Mr Salafia’s shooting, Hamalainen was captured on CCTV footage at various businesses in Nowra and Ulladulla.

Detectives allege this was part of a conscious effort to create an alibi.

Bullets were fired before the men fled in a white Subaru Forester in the pelting rain.

In a clumsy move that provided police with a key piece of evidence, the getaway car was dumped and torched but barely concealed in dense bushland near Morton, west of Ulladulla.

The burnt out car was initially spotted not far from the road in July 2013, but it hadn’t been linked to the alleged murder at that point.

A few days later it was moved deeper into the Morton National Park where it sat out of sight for a few years.

After receiving a tip-off in April, police started searching kilometres of fire trails in the heavily-wooded area which, after months of gruelling searches, eventually yielded the charred getaway car.

Hamalanien appeared briefly in Parramatta Local Court on Saturday but did not apply for bail.

He and McCloskey will face Nowra Local Court in January.