The main research direction of the research group:

Bats were studied to answer molecular mechanisms that could coexist with Ebola, SARS-related coronaviruses, etc. for a long time, and their relationship to flight and longevity. The differences between humans and other mammals were compared by virology, immunology, cell biology and various histology. 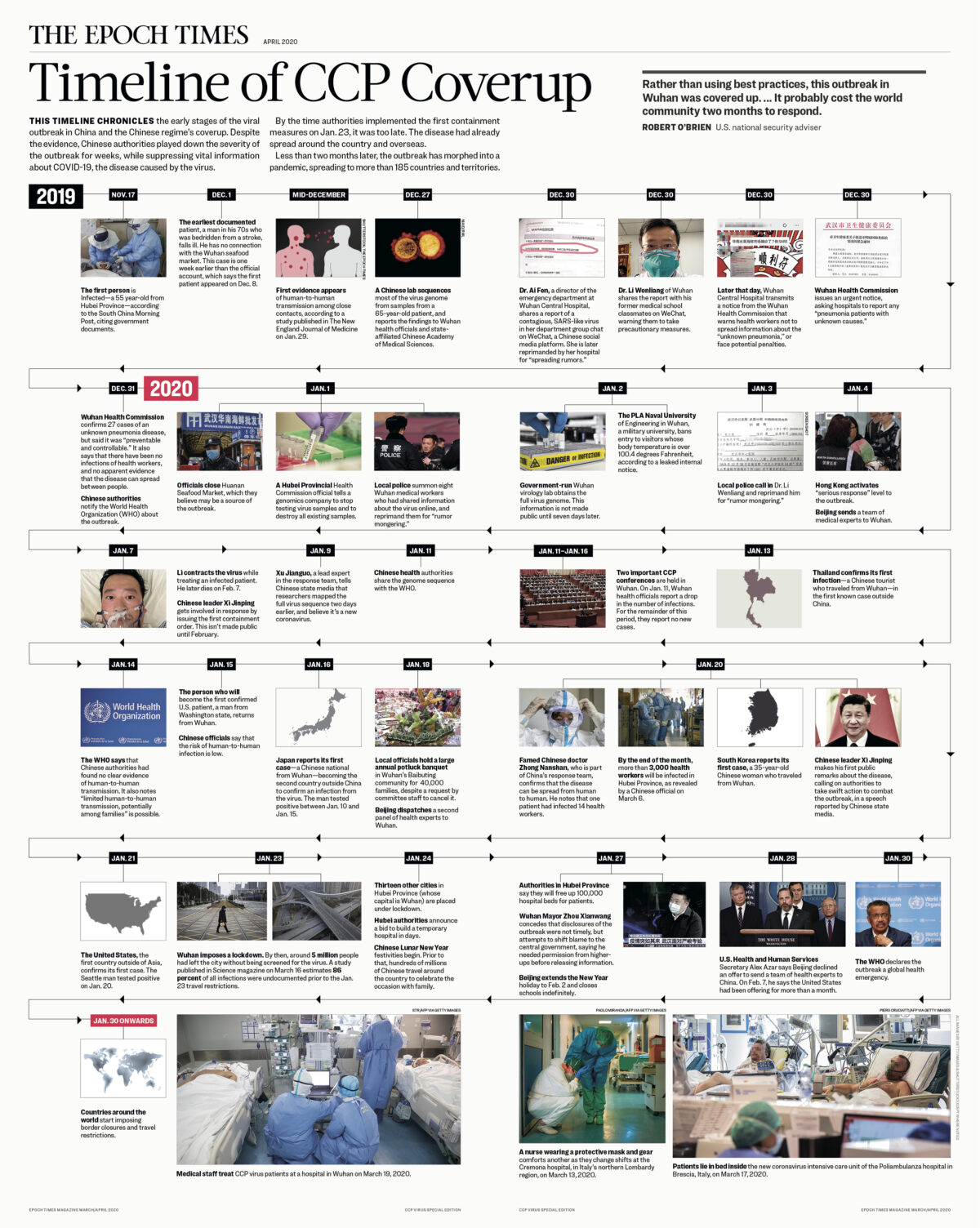 This timeline chronicles the early stages of the viral outbreak in China and the Chinese regime’s coverup. Despite the evidence, Chinese authorities played down the severity of the outbreak for weeks, while suppressing vital information about COVID-19, the disease caused by the virus.

By the time authorities implemented the first containment measures on Jan. 23, it was too late. The disease had already spread around the country and overseas.

Less than two months later, the outbreak was declared a global pandemic. It has now spread to more than 200 countries and territories.

Dec. 1:
The earliest documented patient, a man in his 70s who was bedridden from a stroke, falls ill. He has no connection with the Wuhan seafood market. This case is one week earlier than the official account, which says the first patient appeared on Dec. 8.

First evidence appears of human-to-human transmission among close contacts, according to a Jan. 29 study.

Dec. 27:
A Chinese lab sequences most of the virus genome from samples from a 65-year-old patient, and reports the findings to Wuhan health officials and state-affiliated Chinese Academy of Medical Sciences.

Dec. 30:
Dr. Ai Fen, a director of the emergency department at Wuhan Central Hospital, shares a report of a contagious, SARS-like virus in her department group chat on WeChat, a Chinese social media platform. She is later reprimanded by her hospital for “spreading rumors.” Dr. Li Wenliang of Wuhan shares the report with his former medical school classmates on WeChat, warning them to take precautionary measures. Later that day, Wuhan Central Hospital transmits a notice from the Wuhan Health Commission that warns health workers not to spread information about the “unknown pneumonia,” or face potential penalties. Wuhan Health Commission issues an urgent notice, asking hospitals to report any “pneumonia patients with unknown causes.”

Dec. 31:
Wuhan Health Commission confirms 27 cases of an unknown pneumonia disease, but said it was “preventable and controllable.” It also says that there have been no infections of health workers, and no apparent evidence that the disease can spread between people. Chinese authorities notify the World Health Organization (WHO) about the outbreak.

Security guards stand in front of the closed Huanan wholesale seafood market in the city of Wuhan, Hubei province, on Jan. 12, 2020. (Noel Celis/AFP via Getty Images)

Jan. 1:
Officials close Huanan Seafood Market, which they believe may be a source of the outbreak. A Hubei Provincial Health Commission official tells a genomics company to stop testing virus samples and to destroy all existing samples. Local police summon eight Wuhan medical workers who had shared information about the virus online, and reprimand them for “rumor-mongering.”

Jan. 2:
Government-run Wuhan virology lab obtains the full virus genome. This information is not made public until seven days later. The PLA Naval University of Engineering in Wuhan, a military university, bans entry to visitors whose body temperature is over 100.4 degrees Fahrenheit, according to a leaked internal notice.

Jan 3:
Local police call in Li and reprimand him for “rumor-mongering.” The National Health Commission issues a notice to researchers to hand over virus samples to designated pathogen detection agencies or destroy them.

Jan. 7:
Li contracts the virus while treating an infected patient. He later dies of the virus on Feb. 7. Chinese leader Xi Jinping gets involved in response by issuing the first containment order. This isn’t made public until February.

Jan. 11:
Chinese health authorities share the genome sequence with the WHO.

Jan. 11–Jan. 16:
Two important CCP conferences are held in Wuhan. On Jan. 11, Wuhan health officials report a drop in the number of infections. For the remainder of this period, they report no new cases.

Jan. 15:
The first confirmed U.S. patient, a man from Washington state, returns from Wuhan. Chinese officials say that the risk of human-to-human infection is low.

Jan. 16:
Japan reports its first case—a Chinese national from Wuhan—becoming the second country outside China to confirm an infection from the virus. The man tested positive between Jan. 10 and Jan. 15.

Jan. 18:
Local officials hold a large annual potluck banquet in Wuhan’s Baibuting community for 40,000 families, despite a request by committee staff to cancel it. Beijing dispatches a second panel of health experts to Wuhan.

Jan. 20:
Famed Chinese doctor Zhong Nanshan, who is part of China’s response team, confirms that the disease can be spread from human to human. He notes that one patient had infected 14 health workers. By the end of the month, more than 3,000 health workers will be infected in Hubei Province, as revealed by a Chinese official on March 6. South Korea reports its first case, a 35-year-old Chinese woman who traveled from Wuhan. Chinese leader Xi Jinping makes his first public remarks about the disease, calling on authorities to take swift action to combat the outbreak, in a speech reported by Chinese state media.

Jan. 21:
The United States, the first country outside of Asia, confirms its first case. The Seattle man tested positive on Jan. 20.

Jan. 23:
Wuhan imposes a lockdown. By then, around 5 million people had left the city without being screened for the virus. A March study estimates 86 percent of all infections were undocumented prior to the Jan. 23 travel restrictions.

A resident peers over a barrier set up to prevent people from entering in Wuhan, in China’s central Hubei province, on Feb. 29, 2020. (STR/AFP via Getty Images)

Jan. 24:
Thirteen other cities in Hubei Province (whose capital is Wuhan) are placed under lockdown. Hubei authorities announce a bid to build a temporary hospital in days. Chinese Lunar New Year festivities begin. Prior to that, hundreds of millions of Chinese travel around the country to celebrate the occasion with family.

Jan. 27:
Authorities in Hubei Province say they will free up 100,000 hospital beds for patients. Wuhan Mayor Zhou Xianwang concedes that disclosures of the outbreak were not timely, but attempts to shift blame to the central government, saying he needed permission from higher-ups before releasing information. Beijing extends the New Year holiday to Feb. 2 and closes schools indefinitely.

Jan. 28:
U.S. Health and Human Services Secretary Alex Azar says Beijing declined an offer to send a team of health experts to China. On Feb. 7, he says the United States had been offering for more than a month.

Jan. 30:
The WHO declares the outbreak a global health emergency.

Q: How do you understand "no clear evidence of human transmission"?

A: According to the epidemiological investigation of experts from the state, provinces and cities, most of the cases of unexplained viral pneumonia in Wuhan have a history of exposure to the seafood market in South China, and no clear evidence of human transmission has been found. We are also conducting further epidemiological investigations and related laboratory tests. In addition, no cases have been detected so far among all close contacts, including medical personnel.